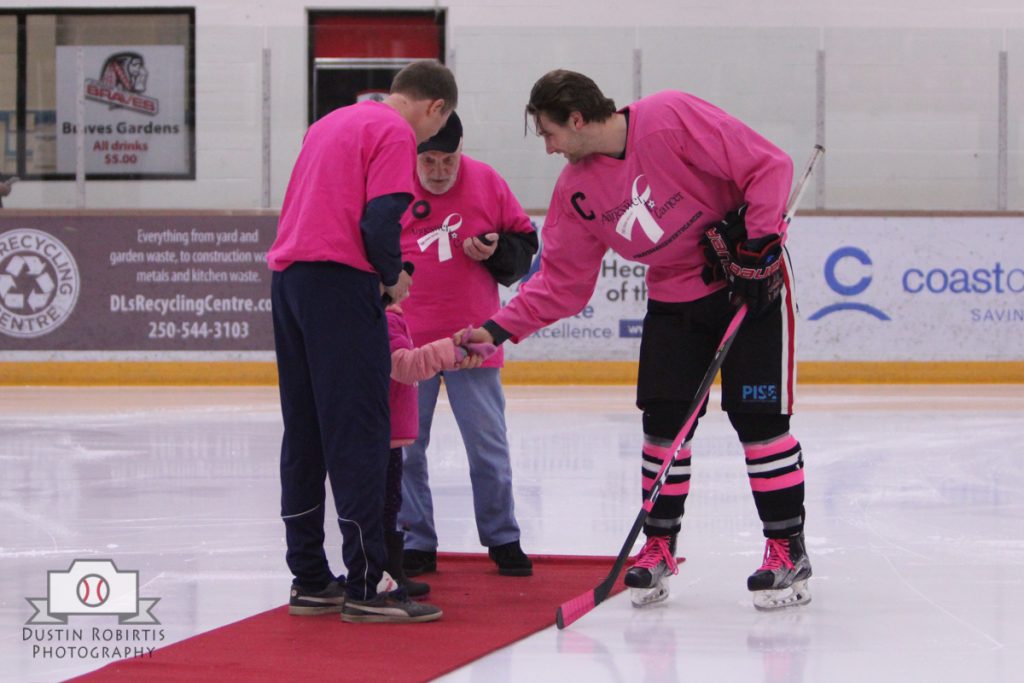 Yesterday at Pearkes was the Pink in the Rink Answer to Cancer night for the Saanich Braves. Throughout the night there was games, raffles, auctions and pledges being made in order to raise money for cancer research. When the night came to a close the Saanich Braves helped raise $16,000 for Victoria Hospice. That is a bigger win then any game could be!

The Cougars were in town for the Cancer game and they opened the scoring half way through the first period. A bad giveaway in the Braves zone gave a wide open net opportunity for a wrist shot stick side which beat Mathieson. After one period the Cougars led 1-0

The Cougars started the second with a goal as well scoring on a backdoor onetimer on the power play. Nick Guerra tallied one for the Braves on the powerplay with a one timer in front. The cougars added 2 more goals before period end both on the powerplay and both backdoor goals on the rush. After two periods the Cougars led 4-1

The Cougars led off the third with another goal. This one came shorthanded when a puck was misplayed at the braves line and led to a breakaway which gave up a huge rebound that was forced back Mathieson. Scott Henderson scored an off angle shot on the powerplay to give the team a little momentum towards the end of the game. Ted Brennan scored late after a nifty move created some space and alowed for a wrist shot which went top shelf. Unfortunately the Braves would not get any closer and lose this one 5-3.

After the game 4 players shaved their heads after reaching their fundraising goal. The Pink in the Rink Answer to Cancer was a huge success.