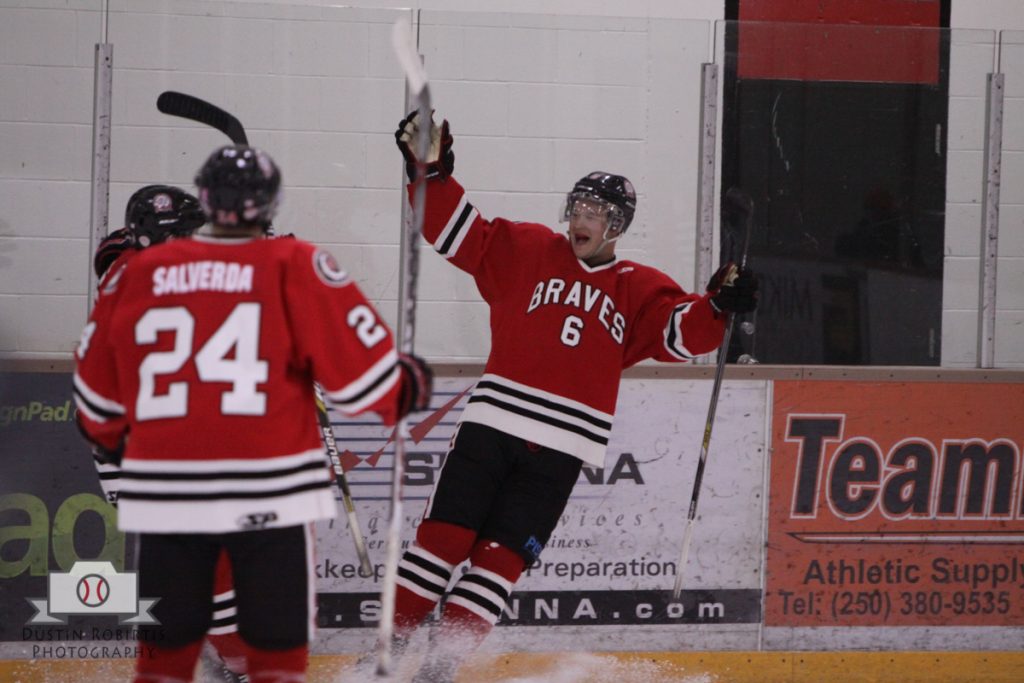 The Saanich Braves are improving and playing better every night out. This was evident last night as the Braves scored seven goals against the Westshore Wolves at Pearkes Arena. While some players had phenomenal individual performances the team also played exceptionally well as a unit earning a well deserved blowout win.

The game started out with a controversial goal from the Saanich Braves. After the Wolves goalie was moved out if his net in the play this left a wide open net for Ted Brennan which he did not miss. This goal set the tone for what would be yet another game full of questionable calls and player frustration. Next Brandon Fushimi dumped the puck in after saving it from leaving the Wolves zone. It ricochet off the end board and right to Nick Guerra’s stick for the open net goal on the blocker side.  The Wolves scored their first goal after a mid ice pass didn’t find a man and left the door open for an odd man rush which the wolves capitalized on. After one the Braves led 2-1

Mitch Moloney opened the scoring in the second period when he corralled the puck on the doorstep and managed to stick handle the puck away from a sprawling Wolves goalie to give himself an easy open net goal. After the Braves took two penalties and were on a five on three penalty kill. Mitch Moloney poke checked the puck away from the Wolves defenseman giving himself a breakaway which he scored on for the shorthanded goal. At the end of these penalties Ten Brennan came off the bench as a result of the penalty change to a breakaway opportunity which he scored on the backhand top shelf.  After two periods of play the Braves lead the Wolves 5-1

The Braves started the third on the powerplay. Mitch Moloney skated past multiple defenders and lifted a backhand goal for the hat trick. Next Quinn Miller found himself in the center of the Wolves zone and a quick pass and snapshot got past the Wolves goalie for the Braves 7th goal of the contest. The Wolves added a goal late but it wasn’t enough to make the comeback as the Braves won 7-2.