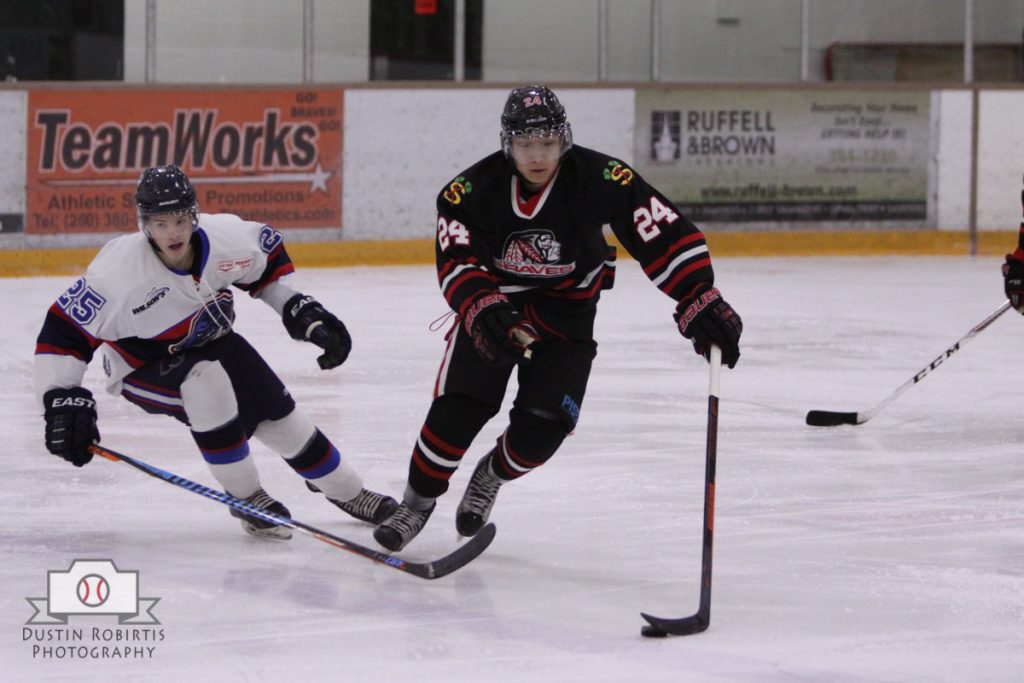 The Braves opened the game on Friday in total control. Puck management, goals, and overall presence on the ice all seemed to be in the Braves favour. Although as the game progressed it seemed like the luck the Braves were having was running out. A mixture between the Panthers coming back and the referees not quite doing the job they should have, the Braves ultimately lost the game in what seemed like very unfortunate circumstances.

Evan Horvath opened the scoring in the first period with a long lead pass from Brandon Fushimi that crossed all three lines. Horvath finished on a nifty deke of the goalie.

In the second period Brandon Fushimi added another goal for the Braves after a puck careened off the end boards in an awkward direction leading the puck right to him in front of the net for an easy goal. The Panthers tallied a goal shortly after on an odd man rush. Evan Badry finished the period with a mighty slapshot goal from the point after the Braves controlling the zone for quite some time.

The third period is where things started to fall apart for the Braves. From this sports fans perspective it seemed as though the Head Referee did not see this game equally and the Braves got the short end of the stick on a few occasions. The Panthers scored a goal in which is seemed as though the net was off before the puck going in. After the goal was allowed Brandon Fushimi was thrown out of the game since he also had a almost identical circumstance in the game get waved off. With the game being a one goal game the Panthers pulled their goalie for the extra attacker. They managed to slide the puck past the sprawling Braves netminder with less than a second remaining sending this game to overtime.

In double overtime the Panthers scored on a two on one rush with a one timer backdoor goal. Braves lose this one four to three.

After the game we chatted with Sam McMullen about the teams next step after this tough loss: “we just need to start from the bottom and work our way up. Start with the basics, get a little traction and get back to our systems that work. We need to get back to playing as a team, we had some selfish play out there tonight and it showed on the scoreboard.”