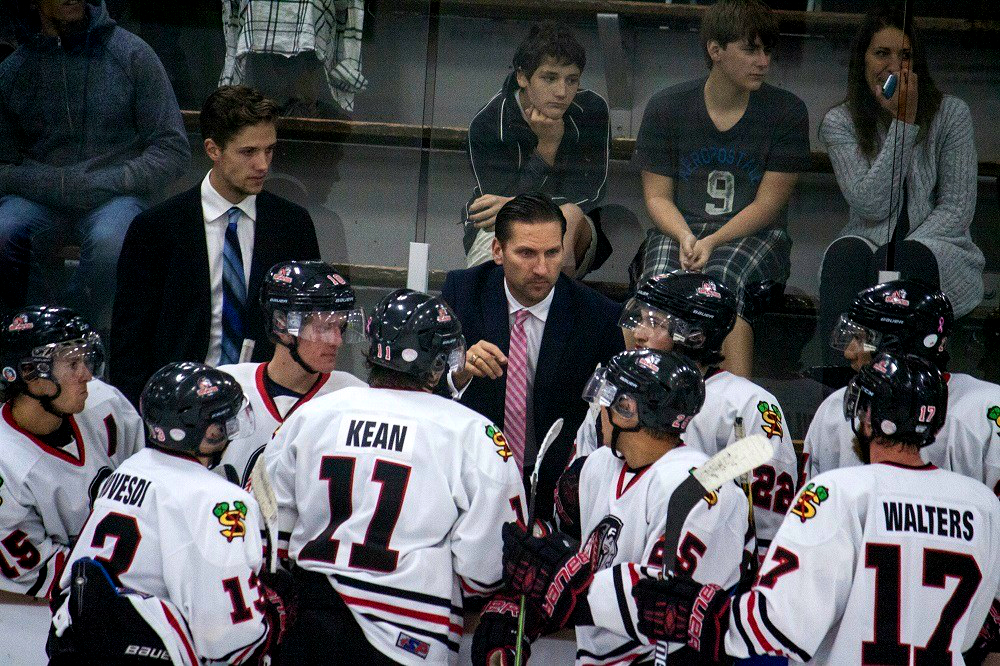 There were a couple new faces at the rink for the Braves second home game of the season, one of which was #25 Brandon Fushimi. Fushimi played in the WHL for the Victoria Royals last season, and he was sure to make his presence felt. The team also announced the name of their new mascot voted by the fans… welcome to the Braves Bauer!

Before tonight’s game the player of the week: Jack MacMillan accepted his award while warming up and taking in the national anthem with the team.

Fushimi made his presence known early with a goal in the first period to open the scoring 1-0 Braves. When asked about his first game back Fushimi had this to say: “I felt a little slow out there, coming back from not playing in a while and not being able to practice, but it felt really good and fun to be back out on the ice again”

The first period was the newcomer show with a second goal from (insert name #19) to make it 2-0 Braves after 1.

The second period continued with the Braves momentum with a goal from Nick Kean to make it 3-0 Braves. At the end of the period The Glacier Kings forward Liam Nijhoff netted a goal through traffic to make it 3-1 after 2 periods of play.

The Glacier Kings made it a one goal game with another goal through traffic from Brandon McReynolds, but the Braves added some insurance from Scott Henderson with a Bobby Orr-esque goal while flying through the crease.

When asked about how his team performed in tonight’s game Head Coach Brad Cook said: “I thought we had a really good start. It was a bit of an odd game for sure. I thought we actually got worse as the game went on, and I don’t know if it was the flow of the game, maybe some conditioning, maybe just having the one game last weekend. We had a bit of a different look in the line-up tonight with two new additions, it was their first game so the lines kind of got a bit jumbled up for us, but a lot of special teams tonight, lots of power plays and penalty kills, especially in the middle part of the game so I think we kind of lost our groove on the bench. These are the kinds of games we put in the memory bank and accept the two points when we can. Overall our compete level was good but our execution wasn’t great, but we’ll take it and move on”