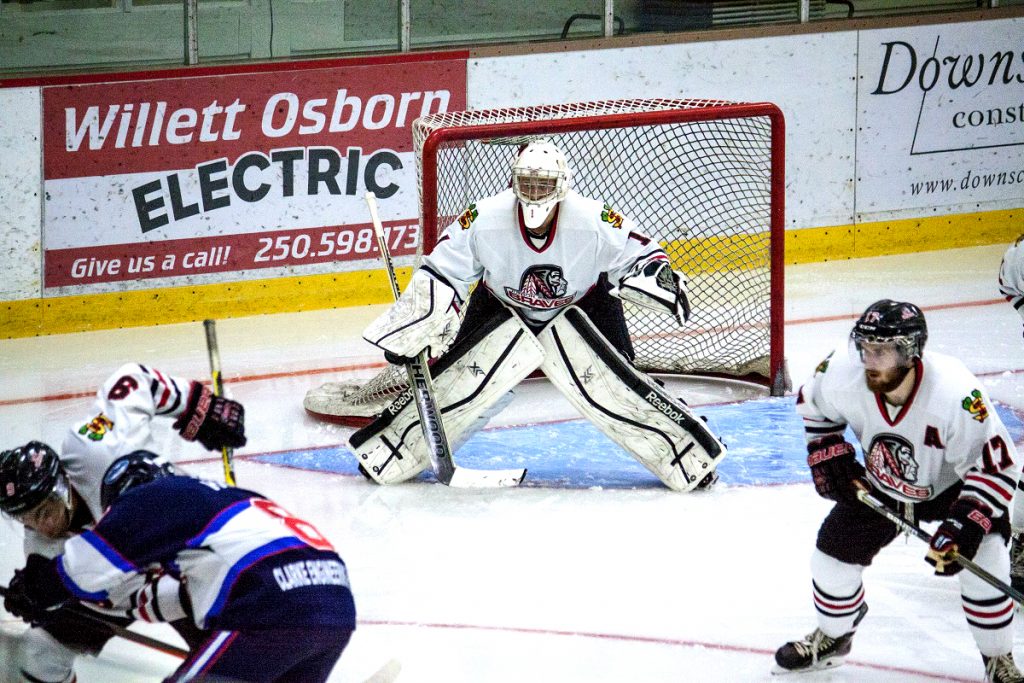 The Sannich Braves get their first win of the season defeating the Peninsula Panthers 4-0. Two big goals by Kovesdi and spectacular goaltending from Riley Mathieson earns the team their first shutout.

The atmosphere was electric as the Braves took the ice for the first time at home. Tensions were high and the Braves were aggressive early netting an early goal in the first on a redirection by Cameron Kovesdi, setting the tone for the rest of the game. Both teams were rough and physical to start the game with some big hits and good checks.

Three goals in the second sealed the win for the Braves. Landon Walters netted a goal from the point to give the Braves a 2-0 lead. An incredible solo effort by the captain Jack Rachwalski going coast to coast through the Panthers defence and wristing a shot top shelf put the Braves up 3-0. Kovesdi’s second goal of the night again on a redirection put this one out of reach of the Panthers.

“It was great, it really helped us basically go through the game, couple big shifts, big hits, especially the fight that Macer had really builds it up for us and it keeps the boys rolling.” Cameron Kovesdi on his teams energy tonight against the Panthers.

A scary moment in tonight’s game. Nick Kean was checked from behind and had to be helped off the ice late in the third period. Frustration from the Panthers was easily apparent after a fight earlier in the period between Panthers Michael Sproule and Braves Kyle Mace.

When asked about how his team played tonight, Head Coach Brad Cook said: “Really well, obviously a great bounce back from a bit of a let-down in the season opener last night. I thought our execution and our composure and our compete level and all-around game was way better tonight. Great energy, a really nice power play goal and our goaltending was outstanding. All around team effort tonight it was good to see.”

The Braves next game is against The Westshore Wolves on Wednesday at The Q Center. Puck drop is 7:00pm.

Want to see more photos from the game? Visit our Facebook page!